According to Guardian journalist Goeorge Monbiot, The government's South West Regional Development Agency (SWRDA) has spent £19m in recent years on extending the airport terminals at Bristol and Bournemouth, aircraft parking at Exeter and airport works at Plymouth and Newquay. The subsidies to Bristol Airport were made in 2004 and included £15,000 to pay for an economic assessment and greenhouse gas emissions assessment for a proposed direct scheduled service to New York and £1.5 million towards extending the terminal. 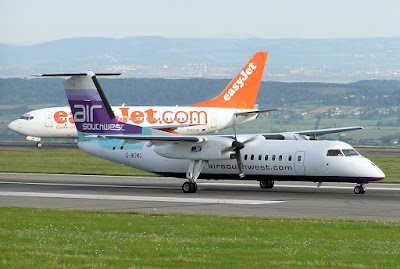 The bulk of the £19 million of SWRDA subsidies were directed at Newquay, so greatly undermining the attractiveness and potential of the existing rail link to the town. Likewise the £4+ million subsidy to Plymouth airport will give airlines a further competitive edge over rail. Now it is possible to fly from Bristol to Newquay in 45 mins for just £29 one-way which, even allowing for airport travel and check-in, is quicker and cheaper than rail (over 4 hrs, £65 off-peak return). Those low air fares owe a lot to public subsidy.

Air travel accounts for less than 1% of total UK business turnover but accounts for 13% of greenhouse gas emissions. You might think curbing the growth in air travel, particularly of domestic flights that can realistically be undertaken by rail or coach, should be the very top of the government's environmental agenda. Instead we find them pouring millions of our money into subsidies to support air travel at the expense of rail travel.

SWRDA is headed by career quangocrats Jane Henderson (CEO) and Juliet Williams (chair) - nice to see women taking a leading role in screwing the environment for our grandchildren. The board inevitably includes local serial quangocrat and Merchant Venturer John Savage, who, we are told, is "passionately concerned about the failure of the British educational system to produce opportunities for a large swathe of underprivileged young people..." which he "strives to redress" through, amongst other things, spending public funds subsidising the business and holiday trips of his privileged chums in the west country's elite.
Posted by Chris Hutt at 13:25

Interesting stat, surprisingly high figure, but unsurprising use of public money by the SWRDA.

Frustratingly the SWRDA's remitt is basically to support economic growth, i.e create jobs, irrespective of any other impact. It just illustrates the misuse of public money by an unaccountable quangos with the the sole objective of creating jobs to illustrate what a good job they do!

On a slight tangent it got me thinking about plot 6 and the petition for a transport interchange.

The plot 6 site is currently frustrating me. Clearly it needs to be used (in part)for the Temple Meads interchange of any rapid transit system introduced into the city. The RDA plan to use the existing concourse for buses and taxi only, which is fine. but any prospect of a tram of even BRT providing a good interchange will require the use of plot 6, which are present is being blocked.

Simply looking at how a rapid transit service could navigate the centre and serve Temple Meads highlights that the north side of temple meads provides a simpler and therefore more realistic prospect of providing an interchange. So why aren't they including this, Is it because it doesn't create jobs?

Ok personally I would love to see some consideration of a tram train system for Bristol. The governemnt is currently planning a two year trial on the Pennistone Line in Yorkshire.

In short run the Severn Beach line and Portishead line into platforms 1 and 2 at Temple Meads respectively (the dead end ones). Continue both sets of tracks under Temple Meads/Digby Wyatt shed into plot 6 and then extend them on street to the centre and back either direct down victoria street or circular via the inner ring road bus lanes.

Extend the existing concourse under temple meads to provide access to new platforms for the tram trains and create a second northern entrance incorporating the Digby Wyatt shed with retail concession/tickets hall and stairs/lift to the extended concourse.

Why are the SWRDA effectively blocking this? Don't they realise there is an intrinsic link between economic growth and the provision of attractive infrastructure?

I know that Bristol is currently putting its self forward with other Core cities to pilot and Accelerated Development Zone. This form of Tax Incremental funding re-couples the link between business rates and infrastructure by allowing the LA to forward fund infrastructure based on future increases in business rates. A dream for Bristol given the current distribution of business rates based on population which never does the city any favours considering the relatively high rateable values and high level of business growth.

I wonder what Jon Rogers thinks of this?

And, as I posted here, the airport owners also paid no tax last year despite a £24m operating profit.
http://takingoutthetrash.typepad.co.uk/taking_out_the_trash/2009/05/bristol-airport-it-makes-money-but-pays-no-company-tax.html