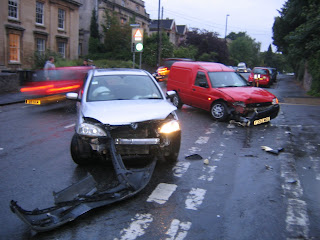 Just a quick plug for the excellent Bristol Traffic site which, thanks mainly to Steve L's diligence and wit, is producing a steady stream of amusing and topical posts depicting some of the realities of traffic in Bristol. His latest scoop is to capture a Road Traffic Accident (shouldn't that be Incident?) and it seems the culpable driver, to boot. who needs the Evening Post, or the Police for that matter?
Posted by Chris Hutt at 08:29 5 comments:

According to councillor Terry Cook, Bristol's so-called "cycling champion" (who famously scuppered a Council motion to protect the Railway Path just a few weeks ago), Bristol needs to address inequalities in cycling. In an article on Cycling City in the Local government Association's online mag he's quoted as saying-

"Cycling rates are lower in some deprived and ethnic minority communities, and women certainly cycle less than men. So we’re doing some serious thinking on why that is and what we can do to increase participation."

I don't want to deprive them of serious thinking time, especially all the coffee and hobnobs involved, but could it just be that we're not all the same? Men are more inclined to take risks than women, higher achieving people are just more dynamic, ethnic groups have different cultural values, that sort of thing?

Oh for the days when the Council ignored cycling and we could just get on with it, using our initiative and entreprise to find solutions to problems. That's how cycling has survived and even prospered against the odds since the 1970s. Now it seems we are to be clobbered with misguided notions of equality, starting no doubt with clumsy attempts to stamp out such individual (male, white, middle class) initiatives as discretionary use of traffic lights.

(Terry Cook has been game enough to respond to this piece in the comments below.)

Why Cycling City could be bad for cycling

A piece in yesterday's Evening Post has prompted me to revisit Bristol's recently gained Cycling City status. In the article Suzanne Savill reminds us that the City council have an unfortunate tendency to latch onto targets for change which have little basis other than wishful thinking. She cites in particular Chooseday which was launched last year with the aim of persuading people to give up using cars on Tuesdays. Needless to say there's been no discernible effect and in the end its failure will merely serve to confirm the cynicism of most observers.

There is a real danger of Cycling City, with its arbitrary target of doubling the number of people cycling in Bristol, failing to make any real impact and leading to a general conclusion that "cycling has been tried but failed to deliver". Although the investment of £11. 4 million to be matched from local sources is substantial, it is well within the capabilities of the City Council to waste such sums on half-baked token gestures that deliver little in the way of tangible benefits.

This is not the first time that Bristol City Council have set themselves a target for dramatically improving the environment for cycling and boosting numbers. They adopted a cycling policy with similar aims in the 1990s. Needless to say it failed to materialise and was quietly forgotten. Will this be the fate of Cycling City? Probably, based on past experience, only this time there's some serious public funding involved which may make a difference.

So where will this £11.4 million (or £22.8 million including local matched funding) actually go? The claim is that it will be spent on "cycling" or even "cyclists", although you can be sure that ordinary cyclists won't see any of it, least of all those who devoted years of their lives to putting cycling on the agenda in the first place. But "jobs for the boys" will certainly feature with vested interests to pay off such as Sustrans and Life Cycle, who will doubtless find a good chunk of the funding channeled in their direction. 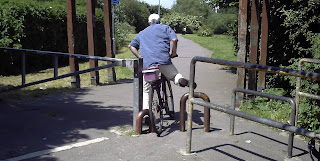 Beyond that a lot will disappear into small schemes of dubious or marginal benefit to cyclists, as has been the case so far. Schemes designed primarily to benefit motor traffic will dip into the cycling pot on the strength of some cycle "facility" provided, as we are finding with the Blackboy Hill proposals. It seems one major new off-road route is planned but again we must look at Bristol's poor track record. Their past efforts are typified by the Malago Greenway which has very poor continuity and a superfluity of access barriers which make cycling the route a frustrating experience.

I'm all for cycling achieving its potential but wonder whether having Bristol City Council promoting it is really the way to win popular support. This is, remember, the same Bristol City Council who failed so spectacularly to secure investment for a tram system, who have blundered over the promotion of BRT (guided busways on cycle routes), who have failed to make Prince Street Bridge safe for cyclists and pedestrians and who seem to provoke public outrage an every opportunity.
Posted by Chris Hutt at 05:42 3 comments:

The casual pursuit of internet links sometimes leads one to serendipitous discoveries. One such is a blog by Professor K Vala Ragnarsdottir of the University of Bristol, the Schumacher Society and the Bristol Sustainability Network, imaginatively entitled "Sustainability". She must be very busy being sustainable because this year she has only found the time for one post on her blog.

But what a post! How succinctly she summarises that auspicious day, the 9th of June 2008, with these words "I visit my friend Sue and her family, husband Andy and daughters Maddy and Lena." That's it! All she has to say to the waiting world about sustainability for this day, and indeed for this whole year, so far.

But a glance at her previous entry, for 22nd November last year, reveals why she has perhaps judged that saying less is best. She says "I land at Newark airport just outside of New York and wait in transit for some time because my internal flight is late. First impression: The airport is full of places to eat." Hmm, how observant.

But hang on a minute, did she say "I land at Newark"? In a blog about Sustainability? So does she perhaps go on to explain why her flight was unavoidable, or how she fretted about the environmental impact? Er no, not a word about it, although she's quick enough to slag off her host nation for being "bimodal" – either grossly obese or normal weight.

She goes on to remark that the newspapers are full of reports about hurricanes and coastal erosion "but still everyone is driving around in SUVs" (but since they're all so obese they'd look damn silly squeezing into Citroen C1s, wouldn't they). What hypocrites these Americans are!

It seems that Professor Ragnarsdottir is herself "bimodal", one minute sneering at the masses for their vulgar, unsustainable habits, the next casually flitting across the Atlantic pumping pollutants into the stratosphere. 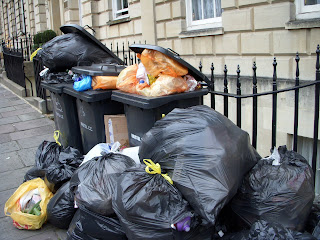 Bristol City Council have the laudable aim of making the City Clean and Green. This seems to recognise the crucial relationship between the quality of the urban environment and people's willingness to interact with that environment in a "green" way, namely walking and cycling rather than driving. This is particularly true for walking where one naturally notices details of the immediate environment which are overlooked by those traveling at faster speeds.

But some pictures sent in the other day remind me that the reality often falls short of the aspiration. These pictures are not of some remote industrial estate but from the very heart of the city around Park Street, an area with some of our finest Georgian terraces visited by tourists and locals alike. One can make some excuses I suppose, but those of us who've lived in Bristol for more than a decade or two know that it didn't used to be like this. 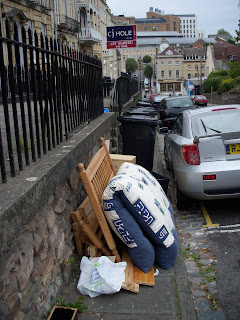 A particular problem for walkers is the presence of wheelie bins of various sorts on our pavements, often restricting or even blocking the footway. This combined with pavement parking, advertising boards, scaffolding, bicycles, signposts and general street furniture can make walking routes a real obstacle course. By contrast the roadway is generally kept clear of all these intrusions.

There is clearly a progressive degradation of the urban environment with more litter and rubbish discarded onto the streets than ever before. It's not necessarily the fault of the City Council, but it is their responsibility to tackle it. And in these cases at least they don't appear to be doing so. Perhaps they should focus more on these basic responsibilities and less on those more abstract concepts like "equality issues" that are way beyond their competence to tackle. 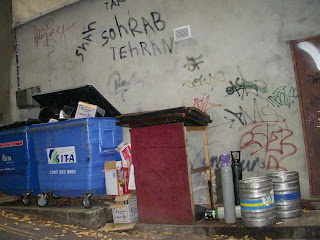 Labels: bristol city council, clean and green, pavement parking, urban environment, walking
Newer Posts Older Posts Home
Subscribe to: Posts (Atom)
How Green is Bristol? What does being a Green city mean anyway? And what about the Green ways of getting around Bristol - walking and cycling? Your grumpy old man about town looks for answers.