It seems that Bristol City Council have let the excitement of being declared the UK's first Cycling City rather go to their heads. Barely months after massive public opposition forced them to backtrack on plans to convert the Bristol & Bath Railway Path to a high speed bus route, they now appear to be selling off strips of that same precious green corridor to property developers for speculative housing developments. 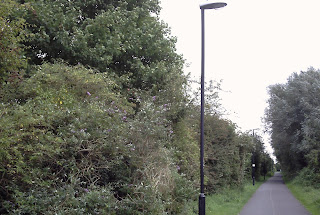 The case that has emerged concerns the Chocolate Factory development at Greenbank. As reported here way back in May a property developer, Squarepeg, plan to build terraced housing along what we first assumed to be the boundary of the Railway Path, but closer inspection of the plans suggested that the planned housing might intrude onto the Railway Path land. We now discover that the City Council are going ahead with the sale of a substantial strip of the former railway land to Squarepeg to accommodate this housing.

Such hubris on the part of the City Council is not so surprising. If the reward for planning to virtually destroy the nation's preeminent cycle path was to be awarded over £11 million of Cycling City funding, what should they fear from a clandestine sell-off of the green margins? Of course the usual suspects are in on the deal - Bradshaw*, Sustrans, George Ferguson and other latterday luminaries who now promote themselves as patrons of green transport.

But what of the thousands of ordinary Path users who campaigned so heroically to save the Path from the Council's misguided transport plans this spring? Have they been consulted? Did they even know anything of the planned sell-off? It seems not, at least not until after the event, when a small print announcement appeared in Squarepeg's newsletter tucked away under the attention grabbing heading "coherent approach creates combined application" (zzzzz) reporting that "negotiations to purchase ... have been successful and the application now includes.....a strip of land that runs along the cycle path".

There are mixed views on this high profile development, as might be expected, and many people are expressing concern at the loss of the green corridor which is as vital a component of the Railway Path as the tarmac path. For all we know, it may even be that the tarmac path itself may be moved over from its existing alignment to maximise the land available for the housing, so the green margins may be degraded on both sides.

There are also concerns about conflict between Path users and residents of the houses, particularly small children and pets, who might emerge suddenly from the concealment of the access ramps into the path of a cyclist. The last thing Path users want is to be put into a position where they are endangering others, especially children. Yet it's clear enough (except apparently to Sustrans) from the sketches supplied that that is exactly what will happen.

But fear not, the City Council always know best and will in due course give their approval to the Planning Application, expected to be submitted next week. They have, according to Squarepeg, already preempted the decision by selling off the land.

(*Later edit - it seems that Bradshaw might not have been involved after all, nor any other elected Councillor! See later posts for details.)

Get out of my way!

It's funny how traveling on wheels, especially motorised wheels, gives one the illusion of owning the road ahead. It must be something hard wired into our psyches for reasons that made sense in earlier stages of human evolution. But today it seems to provoke aggression and violence, even in the most unlikely circumstances.

The latest local incident involves a mobility scooter driven by an elderly woman running over a 5 year old child in a shopping centre. Having uttered the immortal words "get out of my way", she proceeded to knock the child to the ground, run over his legs and then drag him along the ground several metres before again running over his legs and making her escape. Not a word of apology, just hit and run.

When the sort of behaviour normally associated with menopausal 4x4 drivers manifests itself in a pensioner on a mobility scooter it makes you think. The mother of the victim thought and she suggested that mobility scooters should have some sort of bar at the front which would stop the vehicle if it made contact with anything. Not a bad idea you too might think, especially with drivers who might, let's face it, conk out at any moment.

But why only for mobility scooters? Wouldn't such a device make sense on all motorised vehicles, just as a prominent emergency stop button is a standard feature of any other piece of dangerous machinery? After all road vehicles are vastly more dangerous than mobility scooters.

It would certainly shift the balance of power away from those in such vehicles towards those who are most vulnerable, pedestrians and cyclists, which is exactly what is required if we are to counter the "get out of my way" mentality.
Posted by Chris Hutt at 08:45 3 comments:

Car ownership in decline (in Japan)

For many months now car ownership levels in Japan have been declining, from well before the recent oil price increases. As far as I know this is the first example of a highly developed economy where this is happening. Various reasons are offered including the aging population and stagnant economy, but projections based solely on these factors saw car ownership increasing for many more years yet.

More interesting observations note the high cost of car ownership and use, which includes parking charges (since on-street parking is not generally allowed) and tolls for using major roads, combined with an excellent railway system and of course a bicycle friendly environment. Car ownership seems to be far less of a necessity than it is perceived to be in the UK.

But most encouraging of all is the suggestion that there is a declining interest in car ownership, particular amongst the young. Perhaps the sophistication of electronic gadgetry means that there are other status symbols to aspire to. This could be the first sign of what may rapidly become a global trend as much higher fuel prices start to bite. 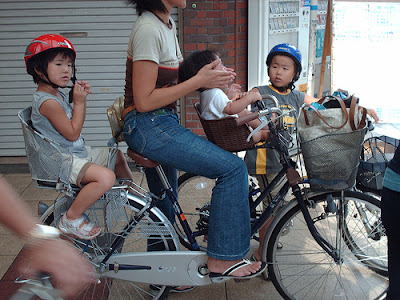 If car ownership rates start to decline here it would call into question almost all the transport planning of recent years. Would there then be any point in pursuing such unpopular policies as congestion charging and residents parking charges? Would there be any point in investing over £11 billion on expanding the capacity of the highway system? Would there even be any point in capital investment in public transport when this would only ever have been justified by projections of greatly increased congestion?
Posted by Chris Hutt at 21:11 9 comments:

Readers of this blog and the Bristol Traffic blog may be somewhat stunned at the latest pronouncements from Bristol City Council. According to BCC spokeswoman Kate Hartas, "Improved parking enforcement and responsible public attitudes to parking have meant the need for towaway is reducing." One wonders what world these people live in.

On any day I can walk just 100 metres from my home and find half a dozen examples of cars, vans and lorries parked illegally, obstructing the highway, blocking pedestrian crossing points and parking on pavements. What I can't find is a policeman or traffic warden doing anything about enforcing the law. It seems that the major commuter routes to which Bristol apparently give priority are strategic routes for motor traffic, not walkers or cyclists.

Is the government throwing in the towel on global warming?

Today's Guardian reports that the government's chief scientific adviser Professor Bob Watson is warning that we should prepare for a 4°C temperature rise. The government also look set to give approval for new coal fired power stations (Monbiot.com) without any guarantee that Carbon Capture and Storage (CCS) will be applied. These are just the latest signs that government's stated aim to limit carbon emissions and global warming is falling apart.

A 4°c rise in global temperatures would be catastrophic, with perhaps hundreds of millions of people affected by coastal flooding, severe drought in Africa and the Mediterranean and the extinction of 50% of animal and plant species. Such a temperature rise might well trigger other changes, such as the release of methane hydrate deposits in the Arctic, which would then lead to even greater global warming.

Future generations, if there are any, will look back in utter amazement that we allowed this to happen when we had the knowledge of what was happening and the means to do something about it. We might well look around ourselves now and ask "how are we allowing this to happen?" It's not just about such blatant greenwash as Bristol International Airport's proposed wind turbine. The mechanism of failure embraces almost everything that is currently being done in the name of reducing carbon emissions.

So what can we do? It's easy to feel that there's little that one can do as an individual, but if individuals do nothing then there is really no hope. Yet it's not enough to modify our own lives to have a smaller carbon footprint in splendid isolation from the real world. Such pretensions merely pave the road to Hell. We must somehow engage with the wider debate to make government realise that more and more people are demanding real action on this issue. This blog is my little drop in the ocean swell of public opinion that is needed to avoid this catastrophe. What's yours?
Posted by Chris Hutt at 08:39 6 comments:

Labels: bristol international airport, carbon capture and storage, carbon emissions, climate change, global warming, greenwash, wind turbine
Newer Posts Older Posts Home
Subscribe to: Posts (Atom)
How Green is Bristol? What does being a Green city mean anyway? And what about the Green ways of getting around Bristol - walking and cycling? Your grumpy old man about town looks for answers.