With Cycling City money being diverted to fund such frivolities as the Bristol Do and other manifestations of the 'bread and circuses' approach to promoting political apathy, anything as mundane as an actual cycle route is likely to suffer from neglect. 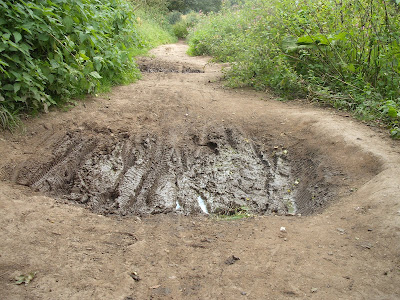 Here we have what would, in a true Cycling City, be one of the most prestiguous cycle routes - the old River Avon towpath between Bristol and Bath. Some sections near Crew's Hole have been upgraded but from Conham to Hanham and beyond it remains largely unsurfaced, often overgrown and in places difficult even to walk. 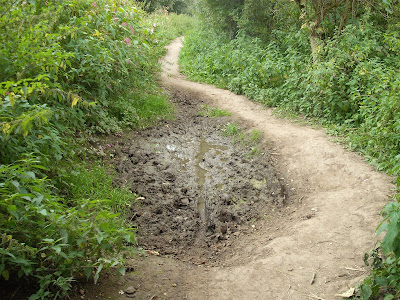 For the most part the outstanding problems are quite minor like these potholes that collect water and untrimmed vegetation. Not beyond the wit of man to solve you might think, especially with the help of an alleged £23 million of Cycling City money. After all this riverside route has great potential as a strategic route linking Keynsham to Bristol and connecting on to the Railway Path at Bitton to provide an attractive alternative Bristol to Bath cycle route (see map below). Surely just the sort of thing that a Cycling City project should give high priority?

But in this case the 'wit of man' is the wit of one of those useless bureaucrats who much prefer to erect warning signs than actually fix problems. And what a thorough job he's done of it. Can there be any category of human activity or any class of risk not accounted for? Bristol City Council must be proud of such a comprehensive piece of arse covering. Whatever kind of accident you might contrive to have, it's your fault because you were warned. Job done. 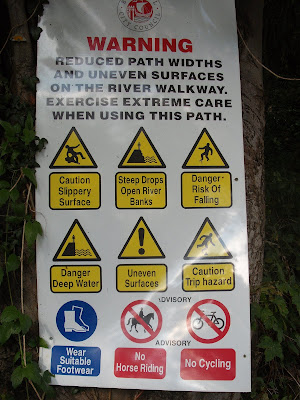 Curiously our 'man' seems to have lost his wits when it came to the signs to discourage, if that is the word, cycling and horseriding. The red circle always signifies a prohition, so a red circle around a bicycle means no cycling. But the diagonal red bar could be taken as a negation of the message, so 'no no cycling'? So to be unambiguous our man spells it out underneath - no cycling. But then adds the word 'advisory'. So that's perfectly clear then, er, just ignore the signs. 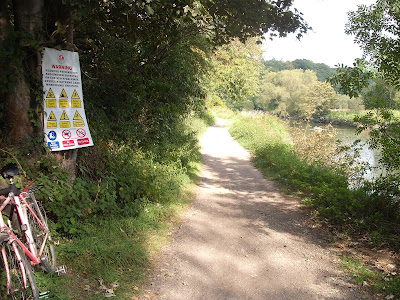 If only the time and money that was spent on these ridiculous signs had been allocated to sorting out some of the actual problems. But that would require a bit of common sense and a willingness to get one's hands dirty, both of which appear to be in short supply in Bristol City Council. Perhaps if we organised some pothole filling as an 'international art work' or a 'multi-cultural celebration' they might be willing to allocate some resources. How about the Conham Caper, or Rider Broke? But should we apply for the Arts Council grant first or the Cycling City grant?
Posted by Chris Hutt at 08:53

The sign reminds me of another Bristol City Council practice: sending someone up a ladder to affix a sign to a lamp-post stating words to the effect of, 'This street light is broken. We'll get round to repairing it some time'. It could have been more efficient to send someone up a ladder to fix it instead, but that probably wouldn't occur to the bureaucratic mind.

Are BCC lighting repairs done by Southern Electric? I think we've been waiting months for them to repair a street light in Kewstoke and I've heard rumours that new managers there have botched the work rosters. Maybe we should go hang a "yes, we reported this broken street light months ago (so please stop calling the councils about it), but Southern Electric haven't fixed it yet" sign on ours. The efficiency of outsourcing, eh?

Painting the lamp posts black in my street the other day...

It took them 10+ years to fill in the bog-holes in the Avon river path under Leigh Woods - and that is a dedicated cycleway! So what hope there is for a muddy old river side track I don't know....

Cycling around Bristol, you realise that the task to significantly improve cycle route infrastructure is an enormous task, and one that a few measly £millions will hardly touch, so it doesn't surprise me that the council are happy to blow it on anything that might get them some publicity, good, bad or otherwise, so that they are seen to be doing something - and you can bet that something isn't going to be as mundane as delay causing, driver frustrating road alterations!

The bad news is I was at a meeting the other day where senior officers referred not only to the need to make 10% cuts to council budgets (because of a shortfall) but also the likelihood of further 10% or more cuts after the general election (depending on who wins).

That is cut in grants, not council tax.

My guess is that spending on anything is going to become extremely hard in the next couple of years, or so.

A 4x4 would get over those holes no problem

It's deeply frustrating Chris, to see the cycling city budget being apparently pissed up the wall like we are.

I keep banging on about renewing some of the markings and route signage on the existing paths that are in desperate need of maintenance.
simple, easy and effective.but no.

C'mon on Mr Rogers, get it in gear!

I assumed that most of the £23 million would be going on project that made new cycle paths and upgraded existing ones.

I've walked the length of this path plenty of times and it could make an excellent cycle path. A few mountain bikers give it a go but for most of us it's not passable.

Getting from Kingswood to Keynsham is no fun at the moment once you're off the Bristol to Bath railway path you have to ride down the very busy A4175.

How can we get this proposal considered?

My 6 yr old regularly cycles this route with me. It makes a change from sterile tarmac. What's the problem with a bit of mud and a few puddles ?

Much rather have some signs, advising caution, than lorry loads of concrete and tarmac. It's a short step from there to a bus route and riverside cycle homes.

Once again, you miss the point.

So Anon you think cyclists should be content with cycle routes that are narrow, muddy and potholed? Do you work for Cycling City by any chance?

It should be kept like it and keep it for walkers..tarmac would change the feel.

If you are the same Anon who said that his 6 year old cycles the route with him, then aren't you contradicting yourself in now saying it should be for walkers only?

There is in fact scope for creating parallel paths within the same corridor, either on the other bank of the river or further away from the same bank.

I'm proposing we create a new urban theatre group - ByKit.
we create modern urban kinetic pieces, they can be called, 'painting eternal cycle signs on the roads of tommorrow', and 'repairing the tarmac of despair' etc.
We apply for a stonking great arts grant, topped up by cycling city money and we go out and do what we want ourselves under the banner of progressive arts workshops.(with a soundtrack of modern jazz)