Hope for the Avon Path?

A piece in today's Evening Post reports that some progress may be being made behind the scenes towards upgrading the old tow-path along the River Avon between Conham and Hanham. You may recall that I blogged about the current appalling state of the tow-path last year, which resulted in some much  neglected maintenance being carried out within a few days. It seems that the publicity might have had a more far reaching effect because the two local councils with riparian responsibilities, Bristol City Council and South Gloucestershire Council, are actually talking to each other about dealing with the problems. Those familiar with local politics will know that this is no small achievement in itself. 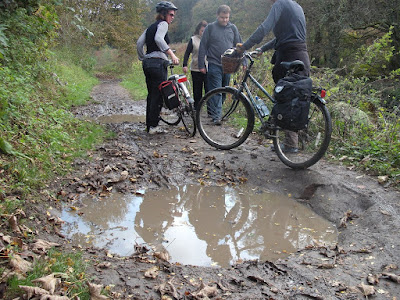 The upgrading of the River Avon tow-path was proposed by local campaign group Cyclebag (the precursor to Sustrans) back in 1978 as part of its proposals for the creation of a Bristol to Bath Cycle/Walkway. It was originally envisaged that the route should follow the Avon to a point south of Bitton where the former Midland Railway branch line would be joined to continue to Bath. The former railway section was built the following year, 1979, as a result of a remarkable volunteer effort powered through by John Grimshaw in particular. But the River Avon section remained largely untouched except for some upgrading between Netham and Conham about 10 years ago. So perhaps 32 years later it is at last timely to progress this scheme, not least in the context of Bristol's Cycling City aspirations? 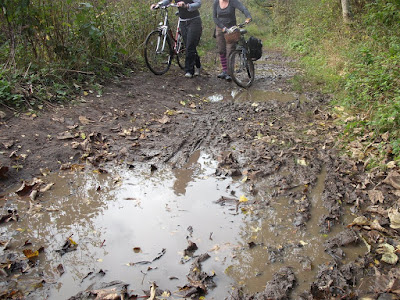 Although the Bristol to Bath cycle route ended up following the former Midland railway all the way back to Bristol via Mangotsfield, a rather circuitous route, the River Avon tow-path route still has great potential to make an outstanding contribution to the range of recreational routes available to cyclists and walkers around Bristol. As indicated in the map below it could also provide a practical commuting and utility route linking Keynsham to Bristol, far more agreeable than slogging down the A4, and an attractive alternative to the established Bristol & Bath Railway Path.

As always emails and letters to the local authorities and relevant councillors will help spur them towards finding practical solutions. It seems from the Evening Post story that South Glos councillor Andy Perkins is taking a particular interest so messages of support and appreciation in that direction might be timely, as well as our old friend Jon Rogers, Bristol's transport supremo.This path really could be a jewel in the crown of cycling around Bristol so think of the warm glow to be experienced in future years when you can take some small credit for having helped rescue this path from dereliction and decay.
Posted by Chris Hutt at 10:31

Glad that progress, albeit slow, is happening. This is good news. Jon

No doubt you played a part in that Jon?

I hope the officers will take a pragmatic approach to this. The engineering report is likely to flag up the high cost of trying to preserve the river bank from erosion, but in most cases it will be possible to move the path further away from the river bank at much lower cost. That of course requires working closely with South Glos since the boundary with Bristol runs along the path itself.

In the short term is it too much to hope that the large potholes in particular can be filled in? It's just a matter of importing a modest amount of stone. I'd be happy to put in a few hours filling in the holes if you can arrange for suitable material to be made available nearby.

Gorgeous path, beautifully peaceful until you get to the vicious scar that is the ring-road.

And what about the lethal road bit between bottom Troopers Hill and start of path in Conham? It's a death trap!

The section of Conham Road that cannot currently be avoided is only 300 metres long and is a problem mainly because of the speed of traffic that is tolerated by the council.

There is of course a simply answer to that - a lower speed limit, say 20 mph, effectively enforced. Such a limit would lead to a reduction in the traffic volume because the road is mostly used as a rat run to avoid the the A431 above the valley.

Alternatively that section of Conham Road could be made one-way for motor traffic, or operated on shuttle signals (one way at a time), to allow half the road width to be converted to a segregated cycle/walkway. That would probably be the best solution.

Failing that a complete closure to through traffic might be in order. It might even be possible to build a new path on the south bank and link it in with a couple of bridges. There are all manner of ways of resolving these things given the will and a bit of imagination, both of which are generally lacking in local government.

my street looks much like that, my local roads/tracks are bumpy and full of pot holes, but each day i love to walk on them- a reminder that it's not all tarmac, we can walk on the earth

I like your positive approach Chris. Some excellent suggestions here - may we hope that any decision-makers could feel able to carry even one of these good ideas forward?

Alice - you're right. Give earth a chance!

Pave over the river whilst you're at it, nasty wet thing.

What no lift needed?

'The speed of the traffic that is tolerated by the Council'

There are no street-lights on this section of Conham Rd and no 30mph signs so don't tell anyone who drives but at the moment there is not even an enforceable 30mph limit. S Glos have put 30mph signs up the hill on their section of the road.

There was a consultation several years ago about narrowing this section of road and moving the footpath on to the river side of the road, but nothing came of it. If you are walking from Conham towards Netham the road crossing where you rejoin the river path is particularly dangerous because of the bend in the road.

There is also another link that could be relatively easily put in place that would improve this route. There used to be riverside path a path from where the 'St Phillips Greenway' ends at the back of Pizza Hut (where the Spine Road crosses the Avon) to the back of the industrial estate off Feeder Rd. You can then cross Feeder Road to join the path through the bottom of Netham Park. If this path was restored you could have an off road route from Temple Meads.

Brilliant scheme. Especially if there's another round of Cycling City.

I used to live in that area as a young kid. Even when Butlers was there, the traffic was so light that it was safe for young children to walk unaccompanied.

Has any one ever walked as far as the Lock & Wier pub from Bristol and back ? If so they must have pasted a sign.
The large yellow sign ,just west of the pub as the path starts, advises pedestrians that they should wear stout footware and be aware that the 'FOOTPATH' is under reconstruction.

The sign is dated Oct 2008. What happened has time stood still ?
Or could be the work has been completed and that the cyclists have undone the work ?


I do realise tha that the cyclists have taken over the Bristol to Bath Railway Path', as their own.
Let us hope they are not allowed to do the same with the River Footpath, as cycles do far more damage, with the concentration of so much weight(of the rider)on such a small area (the bit of the wheel in contact with the ground) must be X100 more than my size 10 boots - hence the rutted wheel tracks.