I adapted and decorated a large bicycle to carry my dad's coffin with a cavalcade of cyclists following behind the cycle hearse to the crematorium.
Around 80 people turned up to say fair well. Thank you all, I was very touched and pleased that so many people made it.

Special thanks to:-
Kevin & Sylvie, Dorothy, Rosalind & Peter, and Rob & Mary
for all their help with the funeral arrangements, also the guest speakers at the service.


Below some sample images from the cycle cavalcade.
Thank you everyone who has contributed to the success of this bolg.
Chris Hutt Jnr. (Son). 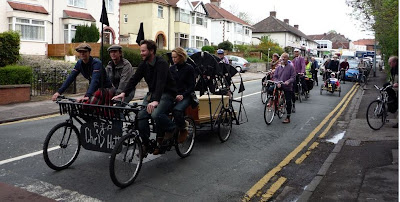 Chris, Please accept my deepest and most heartfelt condolences at this most challenging time.

This is a truly beautiful tribute to someone that sounded like an amazing man. Thanks for sharing, it must have been very hard to write about this.

Can you please email me back?

Thank you for the tribute. It means a lot for a lot of us

Older Post Home
Subscribe to: Post Comments (Atom)
How Green is Bristol? What does being a Green city mean anyway? And what about the Green ways of getting around Bristol - walking and cycling? Your grumpy old man about town looks for answers.