According to a Guardian report Government departments, including those with a major presence in Bristol, are refusing to allow their own staff to take advantage of the Governments own Cycle to Work scheme, which is claimed to "promote healthier journeys to work and to reduce environmental pollution", despite encouraging thousands of companies in the private sector to participate. 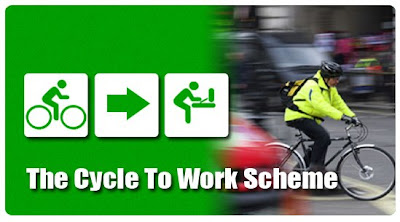 Departments said to be blocking access to the scheme include the Department of Environment, Food and rural Affairs (which embraces the Environment Agency whose head office is at Aztec West in north Bristol) and the Ministry of Defence which employs thousands at its Abbey Wood complex in north Bristol. As an alternative to the scheme Departments offer employees wanting to buy bicycles interest-free loans and discounts at bike shops, but the savings under the Cycle to Work scheme could be four times as much, amounting to 40% of the cost of a new bicycle.

Personally I don't see why people should get tax breaks to buy bicycles, or anything else, in the first place. I don't want the government telling me how I should spend my money or how I should travel to work. Besides it's not the cost of bicycles that deters people from cycling, it's the behaviour of motorists which is something the government can legitimately do something about (but of course they do precious little).

In my admittedly limited experience the people taking advantage of the Cycle to Work scheme are relatively well paid and overwhelmingly middle class professionals. What's more they often buy very expensive bikes to supplement more prosaic bicycles that they already have. So it's very questionable whether the scheme actually delivers in terms of encouraging a modal shift towards cycling or helping people who genuinely cannot afford to buy a bicycle at the normal price.
Posted by Chris Hutt at 07:56

The scheme is not available to self-employed, so my business can't use it. Yet another example of the needless exclusions of the complicated tax systems created by the recent continuous fiddling.

The main tax benefit we could get is the cycling mileage allowance, but at 20p/mile, that's not even worth the administration costs.

The most expensive bike you can buy under the scheme is a thousand quid, so it can't be true to say that anyone is buying a 'very expensive bike'!

For me, it's frustrating that the scheme is not more widely available. Poorly-paid part-time or contract workers (on contracts of less than 12 months) for instance can't take advantage of the scheme, and I - er, I mean, they - seem just the sort of people who could benefit.

Rob, you think a £1,000 bike is NOT very expensive? Do you work for the council or something?

Sorry, but out here in the real world £1,000 bike is seriously expensive. Besides I'm sure people buy even more expensive bikes but 'only' claim for £1k of cost through scheme. Any bike shop would fiddle the paperwork to oblige for that kind of money.

If we purchased one it would constitute the single most expensive one-off purchase in our household's entire history.

I bought my bike brand new for £80. It's been absolutely fine.

Spoke to a young woman on the train with her bike recently who already owned a bike but was struggling to service it and buy parts etc. In her job she was full time employed but her employer was elibible to pay travel for her in a car at 40p per mile. The only help they could offer her on a bike was to use the scheme for er to buy a new one. She already has a bike though, just one that needs a bit of upkeep, samll change compared to whet they could give her towards a new bike. Of course with a new bike she'd need to sheel out a chunk too, which she can;t afford. She was an already motivated cyclist, already travelling by bike, but it seems unable to et any elp to enable her to continue to do so.

Does anyone know of any schemes aimed at helping or rewarding people who are already making good travel choices?

@Adam, "Mileage Allowance Rebate" lets you gain 20p/mile tax rebate for business miles done with a bike, even if the employer can't handle it.

Chris, somewhat put out by your post as an EA employee. So have to add that the Environment Agency does offer the bike to work scheme, as well as interest free loans. Although agree with your suspicions about it effectiveness. Also not so sure its all that great for the bike shops, as the scheme is a private company out to make a profit, so bleeds the shops in exchange for custom, just ask the guys in Bike Workshop.

Anyway, back to the main point, we also get:
- Mileage allowance for cycling on work travel.
- Free soup or fruit at lunch if you cycle in to work.
- Free Dr Bike sessions
- Organised rides and walks from the office

The new office, which is that big building site behind council house, will have 80 cycle parking spaces and only a few disabled car parking spaces. As well as lots of other enviro credentials.

A bit more of a do as we do, perhaps?

Thanks for the feedback Anon. I had a suspicion that the Environment Agency might offer the scheme, even if your mother department doesn't, so I chose my words carefully to avoid specifically saying that you didn't.

I understand that around 1,000 staff will be working at your new city centre office, in which case 80 cycle parking spaces doesn't sound very generous. Do you only expect 8% of staff to cycle? How do you expect the majority to travel in?

I'm intrigued that cyclists get free soup or fruit at lunch. Doesn't that feel a bit patronising? I'd rather be treated with respect than the condescension implicit in such a token gesture.

Fair point on the cycle spaces. I imagine they will simply install more if the need arises. I understand there will be 3 people for every 2 desks, so the % would be higher, but still surprisingly low. In any case the point I was making is that the effort is being made to set an example. But yes theres always room for improvement.

Regarding the soup, not sure I feel patronised by it. It is of course a token gesture, I don't cycle to work everyday for free soup. However its nice that my employer is keen to encourage cycling rather than being indifferent. Saving £5 a week on lunch is always nice. I know, I know, why should your taxes subsidise highly paid public servants lunches!

Love the blog, keep up the good work.

So the 80 cycle parking spaces are nearer 12% of the number of staff present at any one time? Better but still far short of what one might reasonably expect if Bristol were to become truly cycle-friendly.

The 'free soup or fruit' thing suggests senior management on high salaries continuing to drive in long distances from their rural retreats while relying on the lower echelons to meet their 'sustainable transport' targets (for which the top management then take credit) and rewarding you with .. bananas!

But as you will have noticed I'm naturally cynical about all allegedly 'green' intiatives.

"In my admittedly limited experience the people taking advantage of the Cycle to Work scheme are relatively well paid and overwhelmingly middle class professionals. What's more they often buy very expensive bikes to supplement more prosaic bicycles that they already have."

Chris, I do the books for a cycle shop, with branches in Bishopsworth and Bishopston, and my experience is completely different to your characterisation above. While there clearly is a difference in spending between the north and south bristol shops (middle class v. working class?) the average value per Cyclescheme voucher is around £400 including accessories (helmet, locks, lights etc). And while I don't get to meet most of those taking up the scheme, just looking at what accessories they buy, seems to indicate they either have not cycled for many years and are replacing worn out items or are first time cyclists.

bsk, I'm always grateful to have feedback from the real world. I did at least say I was talking from 'limited' experience. Nevertheless it would be interesting to know if there is a class bias in who benefits from these tax concessions overall.

I'd say you are probably correct.

Given the difference in the uptake between our stores in B'worth & B'ston (even allowing for the smaller size of the former) and assuming I can say B'ston is resolutely middle class and (on the basis of two visits) B'worth working class, then I'd say the scheme is skewed towards the former.

I'd be interesting to see some official stats on this. However this may be a chicken/egg thing. Perhaps it is largely companies, that employ middle class professionals, who join the scheme in the first place that ensures a middle class take up, rather than a lack of working class willingness to to use it. Just a thought.

Register of Interest bit: Through the scheme I now have a bike for the first time since I was a teenager around 35 years ago. Yes, I could have gone out and bought one myself, but as a middle class person on a relatively low income I had been reluctant to fork out the £300 plus to get a relatively good bike plus bits need to use & maintain it. As it worked out I got around £450 worth of kit & good bike for around £260 paid for monthly over a year. So, broadly I am for the scheme but obviously work needs to be done to extend this to all people who might want it.

If the object of the exercise was to make cycling more accessible to all then making bicycles and accessories zero rated for VAT purposes would appear to be a simple and effective mechanism. But that would actually work and therefore result in significant loss of tax revenue.

By adopting a complex and inefficient system that is mostly operated by professional, middle class types the government get the kudos from the chattering classes who know how to work the system, without the loss of revenue from those from a more working class background.