Bristol Traffic just beat me to it with pics of the new Hourbike installations, or hubs, in central Bristol, but at least I managed to find the one tucked away by At-Bristol as well as the one on Colston Avenue. The third is by the BRI and, er, that's it apparently, apart from the existing hubs at Parkway station and the UWE campuses. Map viewable here.

The idea is that you hire a bike near the origin of your journey (or modal transfer point like a railway station or P&R site) and then deposit it at a hub near your destination, so no concerns about bike security when you're not actually using it and no need to pay hire charges other than for the time you're actually riding the bike. Ideal, in principle, for shortish trips around town when you don't have your own bike available. 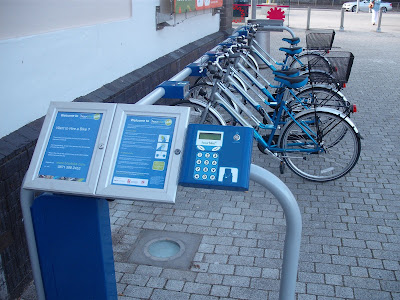 But with such a meagre distribution of 'hubs' the options are extremely limited. At-Bristol to BRI might just about be worth cycling and the BRI is quite close to the bus station, but either destination to the Colston Avenue hub is such a short distance that it's hardly worth the bother of hiring a bike. A longer journey combined with the use one's own bike lock to secure the bike at the destination is possible, but you'd pay for all the time on hire. And how many people are likely to have a decent bike lock with them?

Temple Meads station is the most obvious 'missing link', so could it be that First Great Western weren't willing to fund a Temple Meads hub, as they had at Bristol Parkway last year? Perhaps the minimal usage of the Parkway hub had given them cold feet? Could it be that a Temple Meads hub is due to appear shortly, before the official launch, whenever that is? As usual with Cycling City funded projects we know little more than can be observed on the ground or via the Internet. 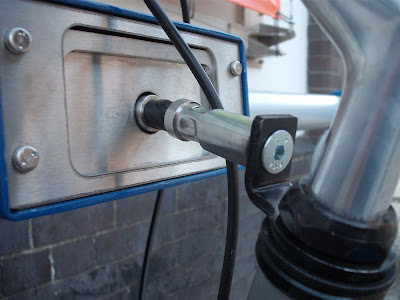 One of the major issues with unsupervised automated bike hire schemes with hubs in public places is the vulnerability of the bikes to theft and vandalism, so let's have a closer look at the details. The bikes are secured by a prong attached to the top of the head tube which looks fairly solid, but the prong appears to be held to the head tube bracket by an allen key bolt. Could it be that all it takes to remove the bike is to undo an allen key bolt?

Another obvious vulnerability, pointed out by Bristol Traffic, is the easy removability of saddle and seat posts via saddle height adjustment mechanisms. BT didn't actually try to steal one, but I did. It doesn't work because at the high limit of adjustment something stops the seat post being raised any further, presumably an enlargement of the very end of the seat post. So at least they've thought of that one. 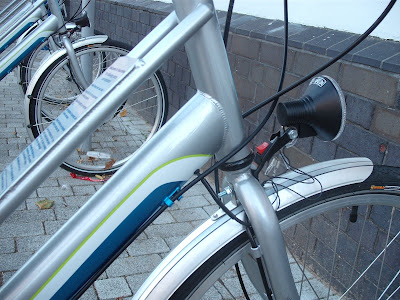 The lights look extremely vulnerable to damage, which is a shame because it's a neat little lighting system based on an expensive hub dynamo. The rear light could have been built into the rear carrier rack to protect it from casual damage and the front could have had a metal frame built around it for the same purpose. Or they could forget about lights altogether and let users make their own arrangements as and when necessary (which is what I think I would have done). 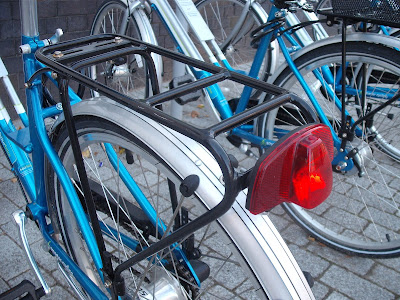 Both wheels are based on some fancy hubs incorporating brakes and with a dynamo in the front so might be considered desirable by those who appreciate such eminently practical features. The rims and tyres look quite decent too. The wheels are secured by what look like hexagon nuts but which on closer inspection appear to be some special security nuts. I wasn't 'tooled up' yesterday so haven't yet had a serious attempt at stealing bits, but we'll see in due course. I guess all the hub brakes connections would have to be undone too so maybe it's simpler to nick the whole bike. 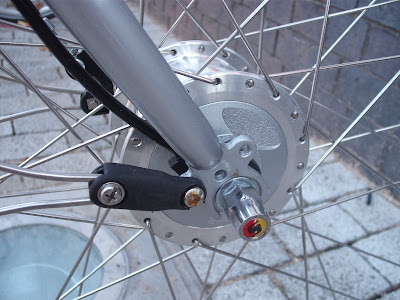 The actual bicycle frames look cheaply built (crude welding) and clunky, so I don't suppose the bikes as a whole will be coveted by many, but some components are seriously vulnerable. CCTV might be a good idea to deter interference, but there were no signs advertising the presence of CCTV (which signs could be displayed even if there wasn't any CCTV, as on the Railway Path, if one wasn't too scrupulous about honesty - at least the Council shouldn't have any problem with that).

So my verdict, based on what I've seen, is that Hourbike in Bristol will be a nine day wonder and briefly attract a lot of media interest, followed by a longer period where it becomes a standing joke as the bikes suffer attrition but precious little in the way of legitimate use. This is primarily because the existing 'network' is so ludicrously limited. If Temple Meads and a few other central locations, perhaps including Long Ashton P&R, were included then it might have a chance. 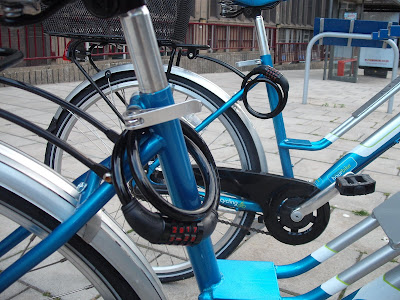 I've since discovered that the Hourbike bikes come equipped with a combination cable lock (combination issued on hire) so you wouldn't need to have your own lock. Having said that cable locks are notoriously easy to cut through and then the hirer would be responsible for the loss. Plus previous hirers of the same bike will know the combination. I wouldn't trust one.
Posted by Chris Hutt at 11:02

Were there any advertising hoardings at the site?

No, advertising at the hubs doesn't appear to be part of the business model (assuming there is one) at this stage.

Even the sponsors of the site in question, like At-Bristol?, don't appear to get prominent credit. Odd.

I posted about this, in the context of some quotes from a video commemorating Paris Velib's first birthday.

I fear the small number of hire stations will prevent Hourbike taking off in any way, since the number of bikes is so short of the level in Paris (1 bike per 200 population).

I recently went to Barcelona where they've got a similar scheme called Bici - and it seemed to be very popular.

- There were racks of these bikes *everywhere*

- Barcelona already has a great metro system and most stations had Bici racks outside them.

- The bike are so distinctive and ubiquitous that there wouldn't be much point in stealing them.

- There are bike lanes all over the place. They seemed to be well thought out and segregated with priority signals (i.e. not just 30m of pink tarmac ending in a parking space).

- Although Barcelona has lots of hills, most of the central part of town is very flat.

I, like yourself, am also passionate about promoting cycling in Bristol.

It would be good to meet you and discuss where we are taking Hourbike.

You're very welcome to take all the space you need here to explain your project to readers of this blog. I'd be happy to make a fresh blog posting of anything you'd like to say.

But the underlying principle of my blogging is that everything that is publically funded should be transparent and open to public scrutiny. A private off-line discussion with you wouldn't really be consistent with that principle. I don't want to be in situation where I am party to confidential information which I cannot share with others on this blog.

You have the right to reply here if you feel that I've been unfair in my comments.

"Starting in November, we will be upgrading all the equipment and starting to install HUBs in the city centre in locations including Temple Meads, shopping and business areas and Tourist locations."

But that was last November!

I posted before about how even in the numbers that they have in Paris, these schemes can only make for a tiny percentage of journeys.

I paid my membership for this scheme as I think it's a great idea and I want to support it.

I keep the card in my wallet at all times because I'm always walking from one side of Bristol to another.

When will they install more hubs? If there were just a few more hubs I'm sure it would start to take off but I've never needed to make a journey that these bikes have been able to help me with.

TM would be a good start, so would Glocester road, lawrence hill, bedminster, clifton, totterdown.

It's so annoying, I fear they will give up on this scheme when I'm sure it'll work if there were just a few more hubs.
Surely all the expense was in getting the framework in place, can a few more hubs really be that much more expensive / awkward?

Matt, as you observe the scheme has been implemented in a manner that more or less guarantees failure. Coverage is far too limited for it ever to be of any practical value.

Personally I think that a more extensive scheme would not be viable in that the costs would far exceed the benefits, but that remains a moot point. Information about the costs/benefits of schemes elsewhere seems very hard to come by (and I think I know why).